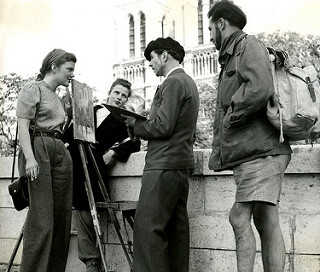 • Toulouse-Lautrec. The MET will celebrate the short but dramatic career of Henri de Toulouse-Lautrec (1864-1901) this summer with an exhibition of more than 100 works. Toulouse-Lautrec will include superb portraits and figures studies in oil and gouache, ink and color chalk drawings of animals and circus subjects, and the famed posters made to publicize Parisian performers and nightspots, including the Moulin-Rouge.
During the 1890s, Toulouse-Lautrec virtually reinvented lithography, a printmaking medium that had been introduced in France earlier in the century. This exhibition, in celebration of the bicentennial of lithography’s invention, demonstrates Lautrec’s dramatically expressive command of the lithographic medium, which he placed at the center of his art in the service of popular press and the Parisian entertainment industry. His posters and portfolio prints made larger than life the colorful world of Montmartre, whose denizens, portrayed onstage and off, were rendered unforgettable by Lautrec’s exaggerated distortions and acerbic wit. After discovering color lithography to be both the artistic argot of his time and an avenue to recognition, Lautrec dedicated himself to his process for almost a decade, producing, on average, one lithograph every week. Till September 15

• Marc Chagall, 1907-1917. An overview of the artist’s earlier career, this exhibition follows Chagall’s life and art from his hometown of Vitebsk to St. Petersburg and to Paris. One hundred works are included: self-portraits, family portraits, depictions of life of Vitebsk, Paris scenes, and Jewish and Christian religious themes. Many works are from private collections and have never before been exhibited in this country.
Through August 4.

• Picasso and Portraiture: Representation and Transformation is the first exhibition to study Picasso’s career solely from the perspective of his portraits. Through September 17.

The Film Society of Lincoln Center is pleased to present “Le Livre, Le Film: French Screen Adaptations”, a selection of 30 French films, based on French novels, plays or short stories, featuring an impressive array of acting and directing talents. From June 28-August 8; the delicate yet demanding art of shaping literary and dramatic works into film, in the rich context of French cinema, will be celebrated at the Walter Reade Theater. All films are doubled-featured except Charterhouse of Parma and The Red and The Black.
The program was organized by Richard Pena and Joanna Ney with special thanks to Bertrand Tavernier for his enthusiasm and encyclopedic knowledge of film and literature; to Benoit Caron, French Cultural services (NYC); Martine Butrolle and Christine Houard, Bureau de Cinema, Ministry of Foreign Affairs (Paris); Jacqueline Chambord and Deirdre Mahoney of the Alliance Française; Nicole Jouve of Interama, Richard May of Turner Entertainment, and David J. Grossman of the Film Forum in Philadelphia.

For the fist time in America, Lincoln Center Festival 96 will present all 19 of Samuel Beckett’s stage works-from the full-length Waiting for Godot, Krapp’s Last Tape, Happy Days, and Endgame to the 121-word Come and Go, from July 29 through August 11.
The Beckett Symposia, organized by Beckett scholar Thomas Bishop, Florence Gould Professor of French Literature at NYU, chair, Center for French Civilization and Culture, and expert in avant-garde French theatre, will feature three major events-two round tables and one evening of poetry readings-and seven individual presentations at Lincoln Center.
The Beckett Symposia have been organized under the direction of Professor Bishop who won an OBIE award for service to Off-Broadway Theatre in 1978 for organizing a month-long Beckett Festival at NYU. A past president of the Samuel Beckett Society, Bishop has written extensively about him. Bishop’s newest book, From the left Bank: Reflection on Modern French Theatre and Fiction, is scheduled to be released this fall by the NYU Press.
The Beckett Symposia will include:
Two roundtables, including “Beckett and the 20th Century Theatre” and “Beckett and Ireland“. Each roundtable will be scheduled for two hours and will include five speakers. “Beckett and the 20th Century Theatre” will take an in-depth look at Beckett’s place in the century from the point of view of theatre. The session will be chaired by Professor Bishop and include playwright Edward Albee; director Pierre Chabert; Mel Gussow of The New York Times; Robert Scanlan, American Repertory Theatre; and Robert Knowlson, University of Reading.
The Center for French Civilization and Culture is the most compréhensive American academic complex devoted to the culture of France, past and present, and incoporates NYU’s four significant spheres of activity in french Studies including the Institute of French Studies, La Maison Française, NYU in France and the department of French.
NYU and Lincoln Center’s Kaplan Penthouse
July 25-Beckett Symposia will run through August 10.
Free. For information, call .

LES PARAPLUIES DE CHERBOURG (Umbrellas of Cherbourg)
This classic film from 1964 has been meticulously restoredin breathtaking color and Dolby stereo sound. In 1964 “Umbrellas” won the Cannes film Festival and five academy award nominations. Catherine Deneuve’s portrayal of Genevière, the role created for her by director and screewriter Jacques Demy, won her international acclaim at the age of 18. It is a love story in song covering four seasons and was filmed entirely in Cherbourg with local residents as extras. Seventy-five tons of snow were needed for the winter scenes. (91 mn). July 7 Sunday 2:30 pm.

LA HAINE (Hate)
Mathieu Kassovitz wrote and directed this troubling film about crime, violence and the dead-end future of young men who are victims of their situations. La Haine is the best known as “banlieue” films, a reference to their settings in the suburbs of Paris, in the volatile, interracial, housing projects there. As the friends wander the streets and roam in and out of their homes, the films assumes the rambling structure of cinema vérité as well its lifelike intensity. (95 mn). August 11 Sunday 2:30 pm.

Paintings of Berkeley artist Jean-Paul Bourdier.
Bourdier’s art explores a nether world of reverie and wonder where dichotomies merge. His self-described “dreamscapes,” vibrating with environmental colors, celebrate the flat elements of design and reveal a craftsman on a quest to create an art that can house the modern soul.
Bourdier is an international authority on traditional dwellings and has been the recipient of many fellowships, including a Guggenheim and grants from the Getty Foundation and the National Endowment for the Arts. He lives in Berkeley and teach architecture at the University of California. Open to the public and free.
June 6 through the end of August.