Home Arte LES GUINGUETTES ET LA SEINE: A CELEBRATION OF RENOIR’S LUNCHON OF THE...
Facebook
Twitter
Pinterest
WhatsApp
Disclosure: This page may contain affiliate links.If you click on them we may earn a small commission.If subsequently you make a purchase, we might earn a little more.As an Amazon Associate we earn from qualifying purchases.There is no cost to you.see Our Disclosure Policy for more info.

By Kirsten Keppel: Impressionists on the Seine, A Celebration of Renoir’s Luncheon of the Boating Party,” WAS AN EXHIBITION  IN 1997 held at The Phillips Collection, 1600 21st Street, NW, Washington, DC

One of the best parties of the season will last three and a half months long and takes place in Washington, D.C. “Impressionists on the Seine, A Celebration of Renoir’s “Luncheon of the Boating Party” is a six-room, 60-painting tribute to the favorite impressionist painters Pierre-Auguste Renoir, Claude Monet, Edouard Manet, Camille Pissarro, Gustave Caillebotte, Berthe Morisot and Alfred Sisley.  Housed in the lovely upstairs chambers of The Phillips Collection, America’s first museum of modern art created in the private home of Duncan and Marjorie Phillips, the exhibit recreates the atmosphere of well known hangouts created in the Ile-de-France riverside towns of Bougival, Asnieres, Argenteuil and Chatou which welcome Parisian weekend revelers. In Chatou, for example, the  and its restaurant hosted worn-out city dwellers in the mood to row, dine well and stay the night. Proprietor Alphonse Fournaise transformed the party into a boat rental, restaurant and small hotel, which Renoir often visited around 1870.

Renoir famous painting Luncheon on the Boating Party was inspired by the conviviality and the atmosphere at the Fournaise which reflected the interaction between classes due to changes in the mid to late nineteenth century in France. Renoir began the painting in 1880s at a time in his live when he seemed to be going through a mid-life crisis. Writing to his friend and patron Paul Berard:

“I am at Chatou…I’m doing a painting of oarsmen which I’ve been itching to do for a long time. I’m not getting any younger, and I didn’t want to defer this little festivity which later on I won’t be able to afford — already it’s very difficult… Even if the enormous expenses I’m incurring prevent me from finishing my picture, it’s still a step forward; one must from time to time attempt things that are beyond one’s capacity.”

“Luncheon of the Boating Party” carries Renoir’s capacity of capturing a group of people into a single image of one moment in time. Its cinematic quality and masterful display of light are amazing considering that no known paper sketches or small painted studies of the work are known to exist. The three-dimensional illusion is created by the awning over the table and the mix of  characters seated there. Figures in the painting, Renoir’s friends in real life.

“Little festivity” is now known as one of the world’s greatest paintings, a hallmark to the Impressionist period. The painting  depicts Impressionist’s favorite subject, modern bourgeoisie alongside the Seine. Parisian art dealer Paul Durand-Ruel  purchased the painting in 1881 and included it in the seventh Impressionist exhibit in March 1882. The painting remained in the private collection of the Durand-Ruel family until Duncan Phillips, an American grandson of a founder of the Jones and  Laughlin Steel Company, bought it for a reported $125,000, the largest sum yet paid for any Renoir’s work. Phillips displayed “Little festivity” in his art collection in his home on 21st Street, Wasghington D.C. In 1921 Phillips and his artist wife Marjorie, turned their home into a museum which they wanted to be “a joy-giving, life-enhancing influence, assisting people to see beauty as true artists do.” The Collection celebrates its 75th anniversary this year; the Ford Motor Company is sponsoring this exhibit of works from collections in ten countries around the world. 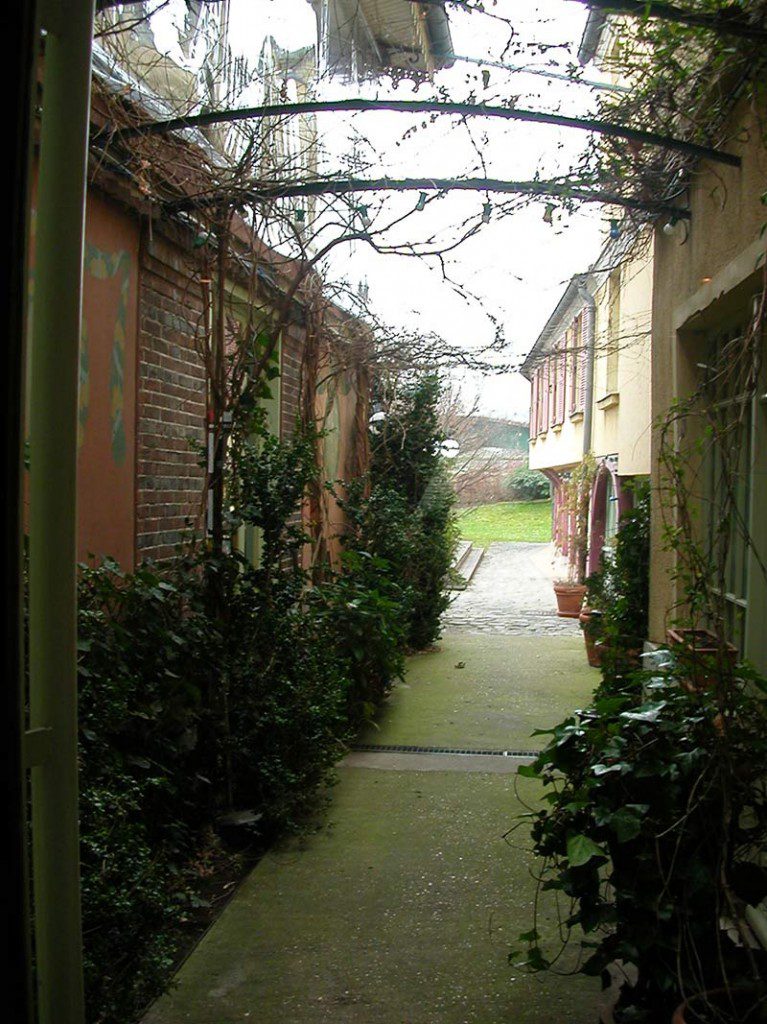 In addition to the Renoir, the exhibit features other paintings. Manet’s The Seine at Bougival and Monet’s Argenteuil Basin at  Sunset have to be two of the loveliest depictions of sunset colors anywhere. Monet’s Autumn on the Seine, Argenteuil has leaves whose brilliance along the riverbanks rivals those found anywhere in mountains or forests. Because each painting represents a scene along the water, their reflection make the paintings look that much larger and real. The paintings are attractively displayed against a deep blue painted wall and set off by hardwood floors. The museum’s carefully chosen, tasteful and subtle six-room display actually tricks the viewer into believing that the entire collection is much larger than it is.

One of my personal favorites is Monet’s The Studio Boat, a painting of the artist’s floating studio which he bought and transformed into an artist’s studio-on-the water in 1871. The museum’s history of the painting explains that Monet may have been inspired by the boat studio of his mentor, Charles Daubigny. The boat studio allowed the artist to have greater access to his main subject, the river, and to paint despite the outside elements.

The Seine links the landlocked capital with the sea and world beyond. Although the Rhone river is France’s largest, the Seine is  its most symbolic, playing a major role in literature and painting. Guy de Maupassant, who is shown at the beginning of the exhibit in a photograph with Jeanne Dumas d’Hauterive and Genevieve Strauss in which three are rowing on the river, wrote in his short story “Mouche” in 1890:

“My one absorbing passion for ten years was the Seine. That lovely, calm, ever-chaing, stinking river, full of glamour and filth! I loved it so, I think, because it gave me a sense of life.”

In the mid to late 1800s, the Seine transformed the way Parisians enjoyed themselves and the localities in which poets, artists  and writers were drawn to create and enjoy leisure pursuits. It is ironic to think that past and present residents of Paris today  largely know these towns of Bougival, Chatou, Asnieres, and Marly-le-Roi as stops along RER line A. Seeing this exhibit will  make them want to retrace the artists’ steps, walk alongside the great river and imagine its hank lively with talk, colors and  rowing parties.

The guinguettes, or dance halls, bath houses and boat rental clubs, were frequented by Parisians who craved the effects of fresh air and water. La Grenouilliere was one such spot in Bougival, where a floating cafe was a popular spot for Monet and Renoir, who painted together there in 1869.

It is not exactly guinguette, but The Phillips Collection’s wonderful display of these paintings will definitely entice your  imagination into recreating the clink of glasses, the tilt of a waterfall laugh, and the murmur of a man flirting with a woman  along the river, while Monet paints it all in his boat studio. The museum’s 263-page catalog, “Impressionists on the Seine,” is a gorgeous collection of the paintings with informative essays on life and leisure on the Seine, the river’s role as subject and symbol  in French nineteenth-century literature, and portraits of the artists. These impressionist works are not for those who need art to solve complex problems.

They are for that epicurean connoisseur of that all-too-elusive elixir called “quality of life,” for those dedicated to the pursuit not only liberte, egalite, fraternite, but also of antiquite, qualite, convivialite.