Home Paris Quartiers Ile Saint-Louis – Ile de la Cité
Facebook
Twitter
Pinterest
WhatsApp
Disclosure: This page may contain affiliate links.If you click on them we may earn a small commission.If subsequently you make a purchase, we might earn a little more.As an Amazon Associate we earn from qualifying purchases.There is no cost to you.see Our Disclosure Policy for more info.

The Île de la Cité is an isle located on the Seine, in the heart of Paris. It belongs to the 1st and 4th arrondissements. The Cité represents the original boundary of the city of Paris. All other districts of modern-day Paris have been incorporated into this geographical boundary at later dates.

The Île Saint-Louis, just upstream from the Île de la Cité, is also in the 4th arrondissement. It was initially two smaller islands: the Ile aux Vaches (Island of the Cows), nothing but pasture, and the Ile Notre-Dame, the site of judicial duels during the Middle Ages. It was in the 17th century that the channel separating the two islands was filled in. The work was done by Christophe Marie, a bridge builder and his two fellow contractors, François Le Regrattier and Lugles Poullettier. After the construction, many magistrates and financiers built their mansions here.

For several years, it was believed that the Île de la Cité was the site of a settlement inhabited by the Gallic tribe Parisii since the 3rd century BC. However, despite extensive archaeological excavation and construction work on the island, no significant evidence exists of a settlement before the 1st century AD.

Vestiges of Neolithic habitation dating back to 4500 BC have been found along the banks of the Seine at Bercy, close to the Louvre. It is to be expected that the earliest inhabitants of the area lived on the river plain, farming and raising animals.
During the Bronze and Iron Age, settlements appeared in the marshes, and the inhabitants used the river for trade.

The Parisii, a Celtic tribe, settled the area in 250 BC, erecting a large fortress in what is today Nanterre, a western suburb of Paris and a military outpost on the Ile de la Cité. There was also a Celtic tribe named Parissi in Albion, their name for Britain. It is not clear which of the two tribes split from the other. 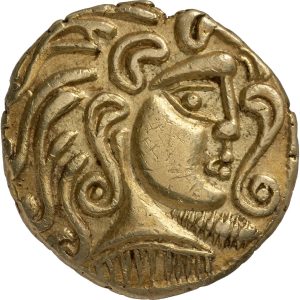 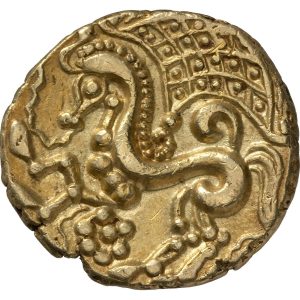 The island, in the middle of the river, was a convenient crossing for many important trade routes served by wooden bridges and was undoubtedly fortified. This was borne out in Julius Caesar’s account De Bello Gallo in which he recounted the inhabitants burning the structures and bridges of the island fortress.
The Parisii would have charged travellers crossing or using the river, but the date they established the necessary fortress required to enforce the toll has yet to be discovered.In his account, Caesar referred to the island as an oppidum or fortress with the Latin name Lutetia Parisorum. The Latin word Lutum means mud, and the Celtic Lut means marsh or swamp. The Latin genitive ending orum means of the Parisii. Parisii is itself Celtic for Kettle. So the Latin name translates as mud town of the kettle people.

At the time of Julius Caesar’s Gallic wars 58-50 BC, The Parisii initially agreed to pay tribute to Rome. In 52 BC, the Parisii joined Vercingetorix’s Gallic coalition of anti-Roman tribes.

At the Battle of Lutetia, the same year, the Gauls led by Camulogenus burned the oppidum and bridges of the island. Still, the Romans crossed the river further south at Melun, marched back and defeated the Parisii. Lutetia became a Roman Town.

In 451 AD, during the barbarian invasion, Lutetia’s inhabitants, were persuaded by the young Sainte Genevičve, not to abandon the city to Atilla the Hun.Genevičve a 28 year old who had received the Veil of Virgins galvanised the population with these words

“Let the men flee, if they want, if they are no longer capable of fighting. We women will pray to God as long as He hears our pleas”

Clovis, king of the Franks and defeater of the Visigoths, made the island his capital in 508 AD. When Clovis persuaded by his wife Clothilde converted to christianity the link between the French monarchy and the church is established.From then until its abolition in 1792 AD the monarchy rules in the name of God.

In the 9th century, the Norman invasions subjected Paris to repeated Viking attacks. One such attack in 885 met with the resistance led by Count Eudes, later king; once again, the defeat was organized on the island.

The island kept its role as a religious and judicial centre throughout the Middle Ages. Notre-Dame (begun in 1163 under the guidance of bishop

Maurice de Sully on a spot sacred since Roman times), Sainte-Chapelle (built in 1245 under the reign of St-Louis), and the Conciergerie are the last three  buildings of the Middle Ages left on the island.

Nonetheless, you can still see remnants of medieval streets on the square in front of Notre-Dame. The plaque here in the square is the zero-point for all distances measured from other towns to Paris, underlining yet again the central role of the island in Parisian history.

LeFrancophile Editors - December 29, 2021 0
Joinville was originally part of the land belonging to the convent of Saint-Pierre-des-Fossés. In 1205, the archbishop Eudes de Sully provided the Abbey with...