Home Littérature IN MEMORIAM : MY LIFE WITH MITTERAND
Facebook
Twitter
Pinterest
WhatsApp
Disclosure: This page may contain affiliate links.If you click on them we may earn a small commission.If subsequently you make a purchase, we might earn a little more.As an Amazon Associate we earn from qualifying purchases.There is no cost to you.see Our Disclosure Policy for more info.

IN MEMORIAM : MY LIFE WITH MITTERAND

It was my third birthday, July 1982 and my parents had taken me to Paris. Paris was an ideal place for toddlers: there were swings in every playground, ponds filled with hungry fishes which leaped and licked your fingers as you fed them French baguettes, (and their favorite ficelles) friendly ducks who had just recently learned to say coin-coin-coin in French, , pony rides and colorful ice-cream carts with minuscule ice-cream cones. It was the picture perfect atmosphere of leisure that Paris enjoys in summer, as depicted on postcards and posters–the Festive Capital of the World.

Everyday I discovered another corner of this Paradise. One sunny afternoon, strolling near Notre-Dame, I noticed a cute donkey waiting for someone to hop on. As it was my habit those days, I unabashedly went straight to the owner and asked him:”What is the donkey’s name?” This was the prerequisite. If I liked the name, I would then run to my parents and ask for a ride. The owner was a pleasant man in country garb, who proclaimed loudly and clearly, as if making an important announcement to the crowd around: “This donkey’s name, Mademoiselle? It is MITTERAND.” I felt that some people who had gathered around were staring at me. Someone laughed, I did not know why. I thought the name was SO beautiful, and so was the little donkey, with his grey-beige smooth silk, and a tempting carnation over one ear.

I cannot remember if I got to ride Mitterand that afternoon, but I remember that, thereafter, whenever we encountered a horse, pony or donkey, I would immediately batpize the quadrupede Mitterand, such a charming word. I also remember the attention I immediately received when, pointing at a donkey, I would exclaim admiringly:”Oh, Mitterand! Un autre Mitterand! Many smiles flashed toward me. Once, a very proper old lady shook her head with appreciation and said: “voyez-moi donc cette gamine, quel esprit! c’est effarant!” Other people would be irritated, upset, even disgusted. But why? This word definitely had something magical. 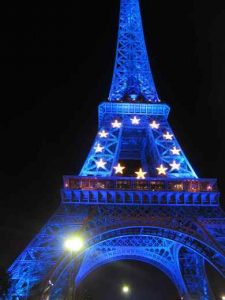 A little later, I understood why: the new President of France was also named Mitterand.  What a coincidence! A little later I learned that Francois Mitterand was not only a great political figure, he was also a nice guy;  a little later I learned that perhaps he was not such a nice guy.  Yet he tried his best to change France and improve the life of his citizens;  he was one of the founders of the European Union.  His vision of the future was large, balanced… visionary.  He was a humanist who loved his country, an intellectual in all senses of the word.  A little later, he was put to rest in his hometown of Jarnac, in the presence of his wife and his mistress (how French!), his two legitimate sons and his one illegitimate daughter And I felt very bad, me too..   And there had been a National Funeral and a National day of mourning, during which heads of state came from all over the world to pay their respects to this great man.A little later the scandal over his health erupted in cyberspace while he continued to rest in peace.   So much of my life was waved around him since the day one of his political detractors named a donkey after him.  I won’t do that again.

Several of Marcelline Block’s poems and stories have been published and she has just been honored with two Silver Keys awards from the Alliance of Young Writers. She is the Editor in Chief of Polyglot.

LeFrancophile Editors - December 29, 2021 0
Joinville was originally part of the land belonging to the convent of Saint-Pierre-des-Fossés. In 1205, the archbishop Eudes de Sully provided the Abbey with...