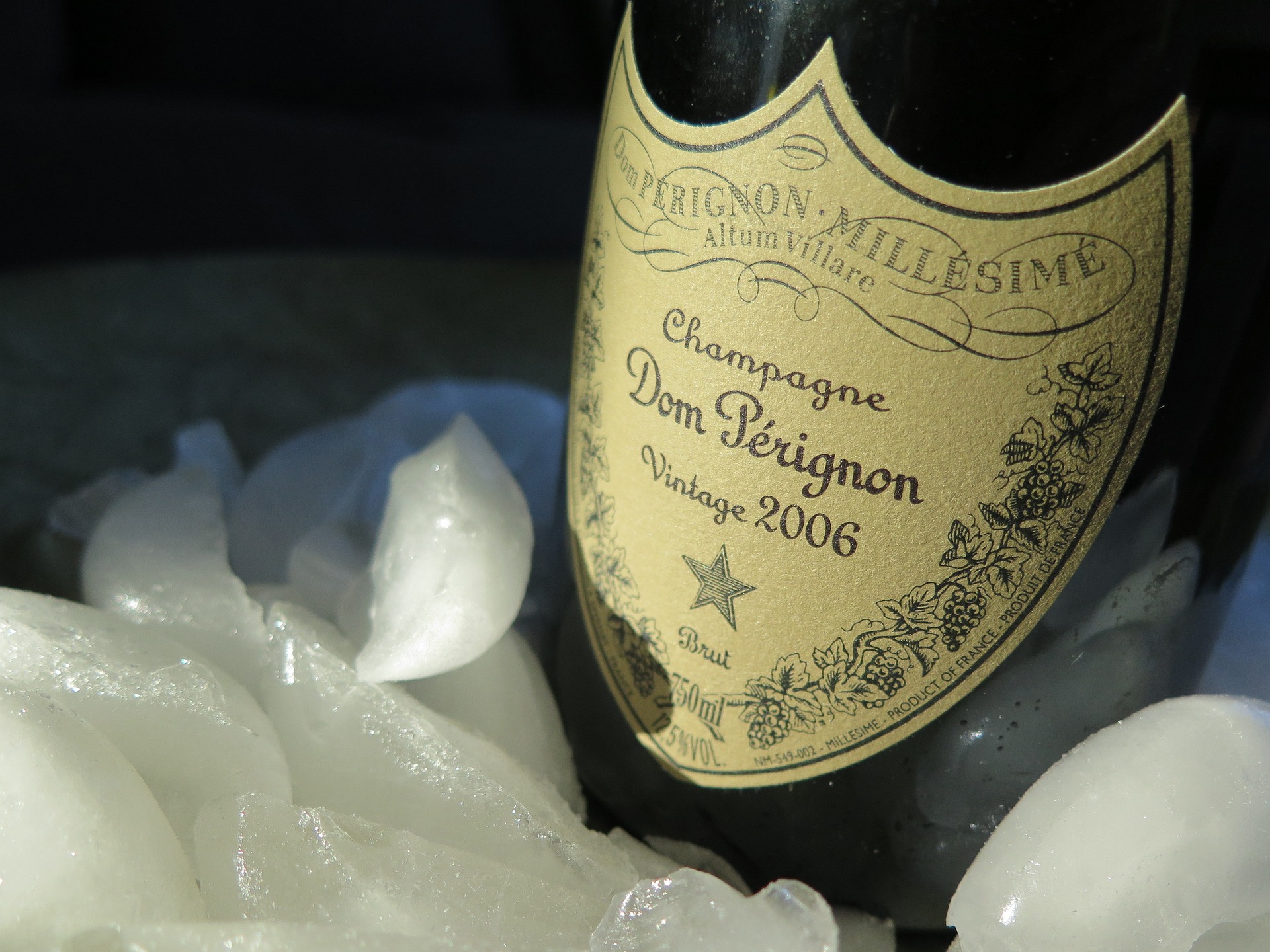 Dom Perignon discovered the taste of stars in a bottle of Champagne in the 1700s and since then the wine has become synonymous with success,celebration and achievement.

“Champagne ……the wine of kings,the king of wines.”Guy de Maupassant.

The existence of sparkling wines is mentioned in ancient Egyptian, Roman and Greek texts. In Champagne, cups and vases found during archaeological excavations have suggested that vines were cultivated in Champagne during the Gallo-Roman era between the 2nd century BC and the year 476 whilst the consumption of sparkling wine from the region has been recognized since the 10th century.

In the 1600s a delicate slightly sharp wine from the Champagne region used to be shipped to England in barrels.This wine had been stored in the chalk cellars of Reims ,Épernay or Ay and over winter the cold had reduced fermentation of the wine to a standstill,but with the potential of further fermentation latent within it.
On arrival it was bottled and the English discovered they had created a bottled sparkling wine.
This bottling was a vital stage in the story of how this ordinary country wine from northern France became the most celebrated wine in the world.
The wine continued to ferment and with the addition of a little more yeast and sugar the wine over a period of two years or more improved beyond recognition.
More importantly the golden bubbles gave it a bright and invigorating quality that was as unique and desirable then as it is now.

Historically, all Champagnes were rose-red in color, as the slow manual pressing prolonged the wine’s contact with colorants in the skin of the grape.At the end of the 16th century, white wines were produced around the villages of Épernay and Aÿ. The  King of France Henri IV decreed this non-sparkling wine acquired the denomination of “Vin de Champagne”.

A Benedictine monk Dom Pérignon the cellar master and bursar of the Abbey of Hautvillers whilst trying to prevent the wine from becoming bubbly, as this was thought to ruin it, gathered grapes  from different vineyards and developed a method of pressing Champagne’s black grapes and blending them with the juice from white grapes to yield white juice, producing wines which were “white,” but still naturally carbonated.

He tried new glass from England with Spanish corks tied down with string which was strong although still not strong enough to resist the natural effervescence of the wine . He lost half of his wine through bottles bursting and these exploding bottles were known as “le vin du diable”, the devils wine.

In part, this is the origins of the original French “méthode champenoise”.

The most critical step in the method is the winemaker’s choice of wines from the different parts of the district to achieve the best flavour. But the exact blending process remains the secret patent of each Champagne house.Success depends on the the skill of the director tasting the raw young wines,gazing into their future and determining how much of the most expensive top quality wine goes into the “cuvée”.

In its literal translation, “cuvée” means ‘tank’ in French, which accounts for at least one of the term’s several meanings.It indicates wines still or sparkling that comprise a blend of more than one grape variety.
The term is also used to refer to the first, very gentle pressing of the grapes, which produce the finest wine.In Champagne, the cuvée is the first 2,050 litres of grape juice from 4,000kg of grapes (a marc), while the following 500 litres are known as the “taille” (tail). The remaining skins and seeds are pressed to produce the eau de vie Champenoise, Marc de Champagne.A powerful spirit,at it’s best the equal of good whiskies and cognac.

As such, “cuvée” in this respect is used to denote quality.However it is not a category in its own right and is not regulated in any way, so ‘cuvée’ is used to imply prestige or quality.

After blending, the wine is placed in a permanent bottle with a blend of yeast and sugar that initiates a second fermentation in the bottle-causing the bubbles to form and it is here where the next progression in the method occurred.

In the early 1800s the widow Clicquot devised a system of removing the sediment without removing the bubbles at the same time.She designed a desk in which the mature bottles of wine could be inserted into holes neck first “sur point”.

Every day her cellarmen would give each bottle a twist  “remuage” , until all the sediment had dislodged from the glass and settled in the neck of the bottle on the cork.Then they took out the cork whilst the bottle was upside down letting the plug of wine and sediment escape “dégorgement”,topped up the bottle with wine from another and put in a new cork.

Thus completing the required painstaking,laborious and expensive stages of the modern “méthode champenoise”,although today the sediment is frozen first to make disgorging easier and the remuage is carried out on hundreds of bottles at a time by machine.

Every trace of sugar is used up when Champagne is fermented in the bottle,it becomes too dry for most tastes so a little sugar is added to the wine at this stage.The amount of sugar added determines the whether the label declares the wine; Brut less than 2%,for Extra Dry 1.5-2.5%,for Sec 2-4%,for Demi Sec 4-6% and over 6% for Doux.

Each Champagne House has a tradition in the style of wine it makes and there should be no difference noticeable from one year to the next in their non-vintage offering.In outstanding years a vintage Champagne is produced but the super luxury cuvées such as Moët’s Dom Perignon,Roederer Cristal,Dom Ruinart,Taittinger’s Comtes de Champagnes in theory relegate even these to second place.

So Champagne AOC is wine not just limited to a region and specific grape varieties but also to the  “méthode champenoise” through which every drop of wine must pass to qualify for the appelation.

The region  just 90 miles north east of Paris is centred around a small range of hills emerging from the chalk valley through which the river Marne meanders.The names of the villages are not in themselves famous because Champagne  is a blended wine known by the name of the maker.

88% of the vineyards are owned by 19,000 small growers who mostly sell their wine to the famous firms although 5,000 of these are small artisan growers like Yveline and Alain PRAT  who bottle and sell their own wine. Récoltant-Manipulant is the term in French, and Grower Champagnes can be identified by “RM” on the wine label.The larger Champagne houses have holdings in only 12% of the region’s vineyards, making it a necessity for them to buy grapes from independent growers.

There are four distinct parts to the heart of the region and some of the character of the wine from each makes the traditional Champagne blend.
The Montagne de Reims the most northern vineyard on a north slope planted with Pinot Noir vines whose black grapes require pressing very quickly to produce white juice without a trace of colour.Traditionally Montagne wines contribute the backbone and the headiness and bouquet of the blend.
The Vallée de la Marne with south and south eastern slopes trapping the sun and planted with mostly black grape varieties of Pinot Noir and Pinot Meunier.Bouzy one of the very few villages known by name for it’s wine produces a small quantity of still red wine.
The Côte de Blancs is the east facing slope south of Épernay planted with white Chardonnay grapes which contribute freshness and finesse to the blend.Wine from here without blending with the black grape varieties is known as Blanc de Blancs.               The Côte des Bar is located in the southern part of the Champagne production area. Crisscrossed by small lush valleys that connect with those of the Seine and Aube, the area encompasses a patchwork of vineyards with many different exposures. The predominant grape is the Pinot Noir.

Another village with a reputation for it’s wine is located here Avize for Blanc de Blancs. Cramant a village known for it’s Crément- a term for lightly sparkling wine now lost to history and to other regions in exchange for other regions not using “méthode champenoise on their labels was famous here once.