Home Vin The wine and the Vine 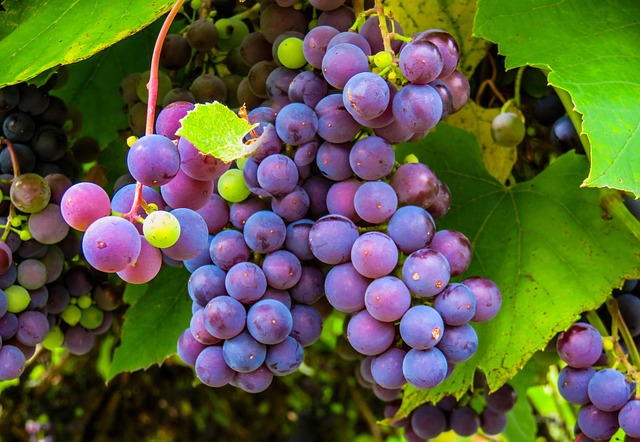 Under the vine leaf.

Everything you wanted to know about wine and the vine. The winegrower’s calendar and the winemaker’s secrets explained.

The life and culture of the vine.

The vine (of the genus Vitis in botany) is a plant of the Ampelidae family. It grows mainly in warm or temperate regions. It includes many species, including the Vitis vinifera, which provides all the grape varieties used in European winemaking.

Vitis vinifera varieties are susceptible to Phylloxera, the greatest disaster in the history of European viticulture. Since 1858 when the Phylloxera aphid was first inadvertently brought to Europe from the USA, it has been unwise to plant these varieties on their own roots. The hardy aphid has proven impossible to eradicate. Vine grafting has therefore become an

essential part of viticulture. American rootstocks immune to Phylloxera have been imported for this purpose, and a wide selection is now available. Most of these are, in fact, based on three original American Phylloxera-resistant varieties, namely Vitis Riparia (riverbank vine), Vitis Rupestris (rock mountain vine), and Vitus Belandieri (Texan vine).

The vine is a climbing, sarmentose shrub whose main organs are; the roots, the stock (or stump), the vine shoots, the nodes, the buds, the leaves, and the fruits, which are in the form of grains gathered in bunches (grapes).

The vine’s life begins at the end of winter, with the first signs of sunshine. At the end of its vine shoots, pruned by  pruning shears, appear sparkling drops: these are the “tears” of the vine, tears of joy of the old vine awakened by the thrust of a new sap.

The buds then swell and, under the influence of heat and humidity, open and purge their downy floss. They dot the vineyard with tiny, tender green leaves, in the middle of which already appear small clusters. Initially relatively slow, the leafing accelerates as soon as the ground warms up. Drunk with heat, the unruly and intrusive vine shoots lengthen. Young shoots multiply. The vine’s rapid growth sometimes makes it the victim of spring frosts.

Then comes the flowering (mid-June) when the temperature reaches 20°. The growth period having calmed down, the vine requires long days of sunshine during fertilization. The grain forms, the fruit set already

breathing, feeds, and quickly gains weight and volume. At the height of development, the véraison occurs. Supplied by roots and leaves, the fruit

fills with sugar until it can no longer absorb it. The grapes change colour from green to either transparent yellow or deep purple. The maturation process is completed. All that remains is the harvest la vendange.

Completing the harvest marks the beginning of a new cycle in the vineyard’s work calendar.

It generally takes place in October and November.

Using pruning shears, the fruit branch of the year and the useless vine shoots at the bottom of the stump are removed. The uprooting of dead vines is followed by démontage or preparatory pruning. The vine is ready for spring pruning.

Nowadays, most pruning is carried out by battery-operated shears. The pruned branches will be burned.

In December, the same type of work continues unless there is a freeze.

In January, pruning begins again after the 22nd, Saint Vincent’s day, the patron Saint of winemakers to direct, regulate and improve the vine’s vegetation and fruiting. An essential operation since its purpose is to train the vine.

This pruning will last until March, followed by spreading fertilizers and grafting on the new plants.

In April, it is the preparation and care of the soil of the vine which is 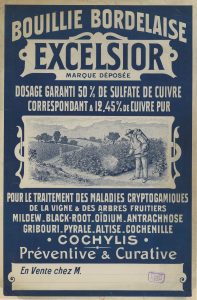 In May, treatments to protect the vine against parasites, insects, fungi, powdery mildew and mildews will be performed. Not so much Bouille Bordelaise (copper sulphate neutralized with lime) in a hand-pumped backpack copper sprayer, but treatment with fungicide products sprayed by tractor or helicopter.

In June, the treatments continue, to which is added the “green harvest,” which consists of cutting a certain number of bunches on the vines whose production is considered excessive.

Same work in July and August.

In September, leaf stripping is carried out at the grapes’ height, allowing more sunshine and better aeration of the bunches.

End of September, October: harvest, the culmination of the wine year

The juice collected by crushing the grapes is called le moût. It has the property of turning into le vin after fermentation.

La vinification is the set of processes for making wine. L’élevage aims to improve and preserve wines, while l’œnologie deals with the science of wine.

The grape (le raisin) comprises the stem and the grain, whose skin encloses the pulp and the pips.

The must (le moût), obtained by pressing, contains most of the constituent elements of the grape.

Stems and pips contain tannin, and too much tannin can give the wine a certain harshness, hence the desire to eliminate these from the must.

The pulp and the skins provide the wine with the essential elements (sugars, acids, yeasts.)

A Typical winemaking timeline (but there are variations)

Foulage-égrappage: elimination of stalks and as many seeds as possible.

Cuvage: the crushed harvest is introduced into large containers made of wood (oak), cement, enameled steel, or stainless steel to undergo fermentation.

Décuvage: after about ten days, the wine can be drawn off and separated from the “marc” (residue composed of skins and seeds…)

Pressurage: pressing consists of extracting the wine from the marc by pressure and presses.

The ageing of the wine begins as soon as fermentation is finished. It is housed either in vats or in barrels.

The main treatments for new wines are:

Des ouillages or remplissages (top-ups) to keep the containers always full so that no air pockets occur where harmful ferments could develop;

Des soutirages (racking) to separate the clear wine from the deposits (or lees) that accumulate at the bottom of the containers;

Des mises en bouteille ( bottling). When the wine is free of its lees, is clear, and fermentation has ceased, it can be bottled. It will then no longer require any care and will age naturally.

The mystery of ageing.

Ageing when the wine is in barrels is a natural phenomenon explained by slow oxidation resulting from a certain air absorption. But aging in bottles, which is especially sensitive in great red wines, still remains, for oenologists, a mystery to be discovered.

Some attempts at artificial aging by individuals not grasping the subtlety of these slowly and peacefully accomplished modifications have been made. They all failed.

There are still secrets that nature refuses to reveal. Quoting Gaston Roupnel (1871-1946), historian of the French countryside.

“It is, therefore, necessary that this great wine fulfils its promise, tempers its violence, achieves its grace, develops it’s velvetness, becomes the generous wine whose strength seems tenderness, whose old age seems like the purity of a flower that opens and, the grace of a flower that dies.”