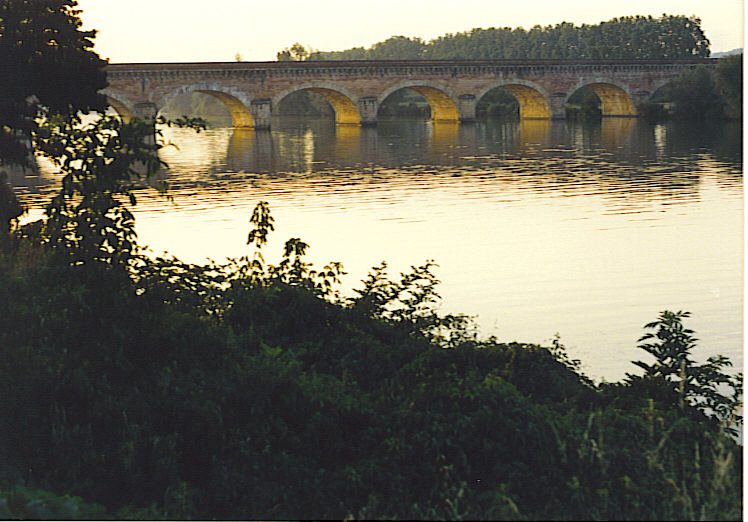 There is no better way to experience the myriad delights of the most popular tourist destination in the world-A luxury barge tour of one of the beautiful French canals. At a maximum of 6kph, you will have time to take in the picturesque scenery, partake of the local food and wine and visit the historical buildings and monuments that abound in the French countryside. Passing through significant towns, you can explore museums and galleries and celebrate at the varied festivals held throughout the year.

The Canal Lateral à la Garonne, or Canal de Garonne, is a small French side canal dating from the 19th century. It connects Toulouse to Castets and Castillon ( Gironde ) near Bordeaux, where it joins the Garonne. It is the extension of the Canal du Midi. It provides safer and more comfortable navigation conditions than the old navigation on the Garonne river. Together with the Canal du Midi, which connects Toulouse to Sète, it forms the Canal des Deux-Mers between the Mediterranean and the Atlantic Ocean. The canal was fully open to navigation on

The Canal du Midi is the French navigation channel with a shared reach that has linked Toulouse to the Mediterranean Sea since the 17th century. First called the “Royal Canal of Languedoc,” the revolutionaries renamed it the “Canal du Midi” in 1789. From 1856, the Canal Lateral à la Garonne, which doubled the Garonne from Bordeaux to Toulouse, extended the Canal du Midi to provide a waterway from the Atlantic Ocean to the Mediterranean Sea. The set of two canals is referred to as “Canal des Deux-Mers.

The Canal de Bourgogne is a 242 km long Freycinet gauge (small gauge) waterway in the Bourgogne-Franche-Comté region. It connects the Seine

basin to the Rhône basin.The canal, which has one hundred and eighty-nine locks and a long tunnel at Pouilly-en-Auxois, was inaugurated in 1832. Its starting point is in Migennes, a town on the Yonne, a tributary of the Seine. It passes through Dijon, and its point of arrival is at Saint-Jean-de-Losne on the Saône, a tributary of the Rhône.

The Canal du Nivernais is a waterway between Saint-Léger-des-Vignes, in the basin of the Loire flowing through Clamency and finishing, at Auxerre, in the Yonne basin.Construction on the canal began in 1784 at La Collancelle, initially to float timber logs from Morvan and Châtillon-en-Bazois to Paris. Interrupted by the Revolution, the work was finally completed in 1824.Due to its reduced gauge from Sardy to Cercy-la-Tour, there is today no commercial transport. It is considered the most beautiful European canal, and many hotel barges cruise its waters. 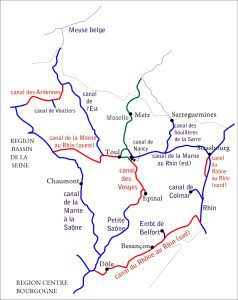 The Canal de la Marne au Rhin connects the river Marne and the Canal entre Champagne et Bourgogne in Vitry-le-François with the port of Strasbourg on the Rhine.The Marne-Rhine Canal crosses Champagne-Ardenne, Lorraine and Alsace.Begun in 1838 , the original objective was to connect Paris and the north of France with the Rhine, and Germany.When it opened in 1853 it was the longest canal in France at 313km passing through the cities of Nancy, Toul, Sarrebourg, Dombasle , Bar-le Duc, Einville au Jard.

The Briare Canal allows navigation to connect the Loire and Seine rivers. It is one of the oldest canals in France and the first of the ” canal à bief de partage ” type (a summit-level canal- an artificial waterway connecting two separate river valleys). Its construction began in June 1605 under Henri IV as part of the public works programme initiated by his minister Maximilien de Béthune, 1st Duke of Sully. The works were in hand by contractor Hugues Cosnier when the king was assassinated in 1610 and was not completed until 1642.
The 54 km of its route and its 38 locks mainly follow the valleys of the River Loing on the Seine side and the River Trézée on the Loire side. It connects the Canal du Loing, from the hamlet of Buges in the Loiret (not far from Montargis ), to the Loire and to the canal lateral to the Loire at Briare.